The establishment of a Hewlett Packard Enterprise computing platform at the Maison de l’Intelligence Artificielle (MIA), will give students, researchers and start-ups access to a high-performance infrastructure to carry out artificial intelligence and machine learning projects.

Hewlett Packard Enterprise (NYSE: HPE) announced that it has been chosen to build a compute and machine learning platform for the Maison de l’Intelligence Artificielle (MIA) located in Sophia Antipolis (Côte d’Azur). This public space, the largest technology park in Europe entirely devoted to Artificial Intelligence and its applications, was created by Charles Ange Ginésy, President of the Alpes-Maritimes region. HPE was selected by the Alpes-Maritimes Departmental Council, the Maison de l’Intelligence Artificielle and Université Côte d’Azur (UCA) to provide an end-to-end infrastructure based on its industry-leading high performance computing (HPC) and artificial intelligence (AI) solutions, powered by HPE Apollo Systems as well as HPE Nimble Storage capabilities. 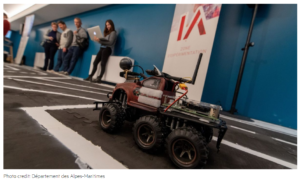 In January 2018, Charles Ange Ginésy became aware of the societal and industrial transformation underway and implemented the SMART Deal digital transition plan. The aim of this initiative is to modernize the operations of public administration and improve the quality of life of its inhabitants while responding to the challenges of the territory, in line with the French government’s ambition to make France a leader in AI.

“The Maison de l’Intelligence Artificielle, a unique place in France, allows everyone to discover and experiment with artificial intelligence. All the players in the Côte d’Azur’s AI ecosystem can come together there to co-construct the region’s expertise,” explained Charles Ange Ginésy, President of the Alpes-Maritimes Department and Chairman of the Syndicat Mixte de la MIA. “The computing platform provided by HPE is part of this approach and will be shared with free access. This new-generation, high-performance solution will be made available to start-ups hosted at the MIA, experimental projects for the region, as well as to Université Côte d’Azur students to enable them to carry out various research and innovation projects. The MIA was inaugurated in March 2020: through it, we hope to instill a national, and perhaps European dynamic on artificial intelligence, in order to win our place on the international scene, which is currently dominated by America and Asia.”

The MIA offers 24/7 access to its computing and storage resources to UCA students and startups hosted on site thanks to a partnership with the Paca-Est incubator to process their complex tasks and deep learning models. The MIA is also open to students and the general public to discover AI through various activities, demonstrators and events.

Here are some examples of projects for which students, researchers or engineers will use the resources of the Maison de l’Intelligence Artificielle:

“We are proud to collaborate with the Maison de l’Intelligence Artificielle to support research efforts and help foster France’s global AI initiatives,” said Jérôme Riboulon, regional director of pre-sales at Hybrid IT and director of the HPE R&D center in Sophia Antipolis. “Our innovations and expertise in high performance computing and our intelligent data platform provide the Alpes-Maritimes Department and its academic and institutional partners with an ideal environment to support the complex modeling, simulation, AI and analytics workloads at the Maison de l’Intelligence Artificielle.”

About the Maison de l’Intelligence Artificielle, a unique space in France undertaken by the Alpes-Maritimes Department as part of its SMART Deal policy

The Maison de l’Intelligence Artificielle (MIA) is a public space entirely dedicated to artificial intelligence and its applications. Inaugurated in March 2020, it aims to acculturate and raise awareness of AI and its societal challenges among the public and young people, and to offer an emblematic place for the Côte d’Azur AI ecosystem, with the ambition of inspiring a national dynamic in favor of AI for the benefit of society.

The MIA project was initiated by the Alpes-Maritimes Departmental Council as part of its SMART Deal digital transition policy, in partnership with the Sophia Antipolis Agglomeration Community (CASA), Université Côte d’Azur (UCA) and the Nice Côte d’Azur Chamber of Commerce and Industry (CCI Nice Côte d’Azur). The Syndicat Mixte de la Maison de l’Intelligence Artificielle (S2MIA), which brings together these four entities, is the body that ensures the implementation, management, development and promotion of the MIA.

Structured into internal components with increased responsibilities, with all of its missions based on the excellence of its research, strongly anchored in its territory, and associated with the major national research players, the Université Côte d’Azur intends to shine on the international scene.

Hewlett Packard Enterprise is the global edge-to-cloud platform as-a-service company that helps organizations accelerate outcomes by unlocking value from all of their data, everywhere. Built on decades of reimagining the future and innovating to advance the way people live and work, HPE delivers unique, open and intelligent technology solutions, with a consistent experience across all clouds and edges, to help customers develop new business models, engage in new ways, and increase operational performance.