Smart Grids, a promising sector for energy efficiency, is thriving on the Cote d’Azur, where since 2010, all the sector’s private companies and institutions have been deploying multiple experiments and innovations.

The Cote d’Azur, committed to a ‘Smart Grid’ strategy

Smart Grids are considered a keystone in energy transition because they facilitate demand management, the development of renewable and decentralised energies and the integration of new uses, such as electric vehicles. Investment in the global smart grid market of €100 billion is estimated by 2025 and €15 billion in France by 2030.

The Métropole is among the Top five Smart Cities in the world, according to Juniper Research’s latest report. Nice is ranked 4th Smart City in the world after Barcelona, New York and London, and bested Singapour. The ranking takes into account ” the cities ‘smart’ capabilities, with particular focus on their use of smart grids, smart traffic management and smart street lighting, alongside aspects such as technological capability and social cohesion, among others.”

An efficient Smart Grid ecosystem on the Cote d’Azur 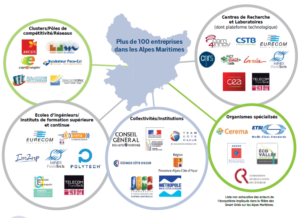 Winner of IBM’s 2011 ‘ Smarter City Challenge‘ the Métropole Nice Cote has made the ‘Smart City’ its speciality by working with the sector’s leading companies on innovative experiments in the field of eco-mobility (Auto-bleue, intelligent parking, Vélo bleu,…) information technologies and the Internet of Things (NFC, connected boulevard,   …), and even e-government (Spot Mairie, ) and e-health.

With the Plaine du Var Eco-Vallée, the Métropole launched the 1st national interest operation dedicated to the sustainable economy and cleantech. The Eco-Vallée is a laboratory featuring a high concentration of on smart grid experiments. The Cote d’Azur Smart Grid Charter was applied to the Nice Méridia urban technological park making this entire eco-district Smart Grid Ready on a scale never before achieved.

The Métropole Nice Cote d’Azur is one of the pilot sites for the European CityOpt, project which aims to develop smart cities in Europe. Every year it hosts the national charge point symposium, IRVE and the Batteries Conference and co-hosts a major international event for those involved in smart grids and the smart city: Innovative City.

Traditionally focused on R&D and innovation, Sophia Antipolis brings together a large number of organisations, clusters, associations, research centres, large corporations and SMEs involved in smart grids. The science park has implemented various smart grid projects (Valsophia, OpenNRJ, Ticelecetc) and is currently involved in the SMART-MED-PARKS project under the European MED programme with 4 other pilot sites.

A showcase for large corporations, a fertile environment for start-ups

GDF-Suez, EDF, ERDF, Veolia, IBM and Cisco are just some of the Métropole Nice Cote d’Azur’s long-standing partners on projects relating to the smart city and energy management, particularly in the Eco-Vallée, where Schneider Electric,  IMREDD (the Mediterranean Institute for Risk, Environment and Sustainable Development) and the Sustainable Design School are based.

Located in Nice Méridia at the centre of the Eco-Vallée, the EC BIC incubator is home to cleantech start-ups that contribute to technological innovation, particularly in the fields of mobility and sustainable energy. These new specialities are in synergy with the expertise that continue to develop in Sophia Antipolis in the fields of information technology, embedded systems, big data and the Internet of Things which fuel innovation in the smart cities.

Advansolar, Qualisteo, Vulog,  Izypeo,  Greenpriz, GridPocket, Azimut Monitoring, Goelectrix, Gridbee et Ask are just some of the Cote d’Azur’s start-ups that regularly stand out in competitions or on national and international markets in the fields of eco-mobility and smart grids.