Team Cote d’Azur and Mauritius’ Board of Investment Partnership

A partnership was signed by Team Côte d’Azur and the Board of Investment of Mauritius (BOI) on March 16, 2017. The document was signed during a forum of 120 businesses and institutions at the Nice Côte d’Azur Chamber of Commerce and Industry. Mr. Rudy Salles, member of parliament from the Alpes-Maritimes and deputy to the Mayor of Nice of tourism and international relations, and Mr. Jean-Pierre Savarino, President of the Nice Chamber of Commerce and Industry, attended the event.

The business forum was led by Pascale Pecha, the Head of Business Development at Team Côte d’Azur. It was the crowning moment of a valuable week for both the BOI and its delegation of Mauritian companies, which was comprised of dynamic businesses developing projects in the domain of Smart City. To advance this relation, Team Côte d’Azur organized several meetings with local businesses and institutions to facilitate the development of mutually beneficial opportunities. A meeting with the territory’s major economic actors provided the chance to create an action plan towards the development of common goals.

During the forum, Mr. Ken Poonoosamy, General Director of the BOI of the Republic of Mauritius, and Heerun Ghurburrun, the Director of the BOI of France and Counsel to the Mauritian ambassador to Paris, affirmed that Mauritius has passed the post card cliché. The island has experienced a spectacular transformation over the past 30 years through dynamic and strong expansion of a diversified economy.

Mauritius is an excellent platform for business in the domains of oceanic economy, logistics, manufacturing industry, ICT, financial services, Smart City, biotech, education, and health, all of which are important to the Côte d’Azur and create an alliance of teamwork between the territories. Jacques Lesieur, CEO of Team Côte d’Azur, emphasized that active support of innovation and talent from the public sector seemed to be the practice in the best interest for Mauritius.

This forum was the first building block reinforcing the economic links between the Côte d’Azur and Mauritius. It concluded with the signing of an agreement which envisions partnership between Team Côte d’Azur and the BOI of Mauritius, in accord with the direction adopted by the Metropolis Nice Côte d’Azur’s Department of Development. The two agencies collaborated to identify and create a bond that will support and favorize reciprocal investments between the two territories. To guarantee the success of this collaboration, both Team Côte d’Azur and the Department of Metropolitan Development step forward in tandem with the socio-economic actors of the Côte d’Azur. 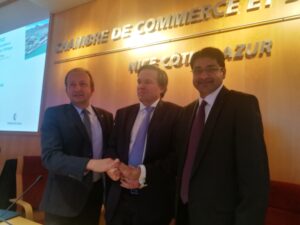 A handshake between Jacques Lesieur, François Daure, and Ken Poonoosamy