The 3IA Côte d’Azur project to create an Interdisciplinary Institute for Artificial Intelligence (3IA), led by Université Côte d’Azur, the CNRS and Inria was selected by the international jury on April 24 as part of the national program for artificial intelligence.

The Ministry of Higher Education, Research and Innovation has just announced the selection of the 3IA Côte d’Azur project to create a new Interdisciplinary Institute for Artificial Intelligence. This project submitted by Université Côte d’Azur brings together the university’s main stakeholders such as the CNRS, Inria, Inserm, EURECOM, ParisTech MINES and SKEMA Business School, and received support from the ECA, the CHU of Nice, the CSTB, the CNES, the Data Science Tech Institute and the INRA. The project was also backed by more than 60 local companies, such as Accenture, Amadeus, ARM, Blu Manta, Doriane, inHEART, NXP, Renault, SAP, Thales and Therapixel, and by public authorities and more particularly the Sophia Antipolis Urban Community.

This selection is part of a wider momentum initiated by Université Côte d’Azur in 2012, when its laboratories were award the first excellence label (Labex), and confirmed in 2016, when the university obtained the label of excellence which places it among the top ten world-class French universities.

Applications for the institute’s research will mainly concentrate on health and digital biology and smart territories.

This ambitious program with 25 endowed chairs at first, and an additional five each year, will form the scientific core of the institute and is expected to increase the university’s attractiveness. 62 large companies, SMEs and startups, mainly located in the South Region will be involved in the project’s innovation program.

To double the number of people trained in artificial intelligence

The goal of the training program is to double the number of people trained in artificial intelligence. Since the international aspect of the project is at the forefront, cooperation will be developed with the privileged partners of Université Côte d’Azur, and more particularly Université de Laval in Québec (Canada), very committed to meeting the challenges of artificial intelligence.

The 3IA Côte d’Azur institute will be located on the Sophia Tech Campus, in the leading European technology park, Sophia Antipolis. With this new institute, the vision of Sophia Antipolis is expanding with horizontal collaboration between companies, universities and local authorities.

Beyond Sophia Antipolis itself, all the stakeholders of the region will benefit from the impulse: the Nice Côte d’Azur Metropolis with its very active commitment to develop a smart city, the Alpes Maritimes department and its Center of Artificial Intelligence in collaboration with the Sophia Antipolis Urban Community and Université Côte d’Azur, and the City of Cannes and its current thinking around AI.

For Jean-Marc Gambaudo, President of Université Côte d’Azur, “This is the culmination of a long process of preparation and discussions between Université Côte d’Azur, the socio-economic partners and local authorities, which started well before the report by Cédric Villani and the announcement of President Macron. The project leader, David Simplot initiated a collective enthusiasm. All the stakeholders mobilized by the project (Université, Inria, CNRS, INSERM, INRA, EURECOM, MINES ParisTech) and the private companies, worked hand in hand with Université Côte d’Azur and I thank them warmly. What a pleasure it is for me, as President, to see my ideas and vision shared and carried by others, younger than me, who were part of the delegation that went to Paris to defend our project.
A delegation probably more focused than others on specific competencies rather than situations, more rooted in the subject of Artificial Intelligence itself rather than in the local political framework. It was important to point out that all the stakeholders of the project were fully committed and shared the same point of view.
I want to pay a special tribute to Benoit Debosque, who left us far too early and whose role at the head of the CNRS delegation was decisive in building a collective momentum and who made it possible to achieve this success.”

For David Simplot, director of the Sophia Antipolis – Méditerranée Inria research center and project leader of the 3IA Côte d’Azur institute, “The most important aspect of the 3IA Côte d’Azur project is that it involved all the higher-education and research institutions of the region for which artificial intelligence is an important field of study, and that private companies were strongly mobilized in a project that corresponds to their DNA. Work on the project is just beginning. The next steps will be to endow 3IA chairs, and set up the working groups that will boost interdisciplinary research, particularly with INSERM and INRA on topics related to health and biology. As regards “smart territories”, our challenge is to raise and attract talent to fill the 3IA chairs.”

For Jean Leonetti, Mayor of Antibes-Juan Les Pins and President of the Sophia Antipolis Urban Community, “With the selection of Sophia Antipolis as Interdisciplinary Institute for Artificial Intelligence, the government is once again confirming our region’s pull. As we celebrate the 50-year anniversary of Sophia Antipolis, the leading European technology park continues to shine with human, technological and scientific potential. Tomorrow, and if our officials are resolved to make it happen, artificial intelligence will be more than ever at the very center of all our everyday tasks. In the past, Sophia Antipolis was able to be a leader in microelectronics, telecommunications, digital technology and the internet. Today we are demonstrating that our technology park has the assets in hand to tackle this new era of AI, and to incorporate deep technological trends.”

For Christian Estrosi, Mayor of Nice, President of the Nice Côte d’Azur Metropolis and Deputy President of the Provence-Alpes-Côte d’Azur Region: “From the very beginning, I wanted the Nice Côte d’Azur Metropolis to back this application. I am therefore delighted by this selection, which is great news for the academic, scientific and economic community and shows the attractiveness of our territory. By hosting the 3IA institute, Nice Côte d’Azur, a globally recognized smart city, is confirming its leading role in the outreach of French industry and in mastering and commercializing Artificial Intelligence, a major technological revolution.”

Jean-Marc Gambaudo, President of Université Côte d’Azur and David Simplot, Director of Inria the Sophia Antipolis – Méditerranée Inria center will hold a press conference on April 29 on the SophiaTech campus, in the presence of the main academic stakeholders involved, the representatives of the Sophia Antipolis Urban Community and of the Nice Côte d’Azur Metropolis, and the main companies that supported the 3IA Côte d’Azur project.

Sophia Antipolis, the first European technopole and hub of digital technology, will welcome the leading Artificial Intelligence specialists from November 20 to 22, 2019. Join this major event around AI that brings together researchers, companies, citizens, economic partners and students. 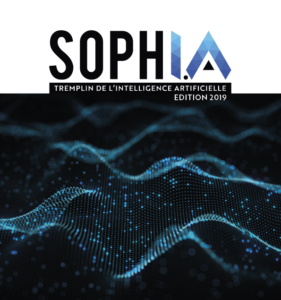