Nice Cote d’Azur airport has announced three environmental innovations in quick succession: the use of the first electric bus with unlimited range and no heavy infrastructure (a world first), its migration to fully electric and fully renewable energy (a first in France) and its level 3 carbon accreditation with the aim of achieving carbon neutrality in 2018.

These innovations are part of a series of ongoing environmental initiatives that aim to reduce damage and pollution while lowering the carbon footprint.

Since 17 October, the first electric bus with unlimited range, using so-called « opportunity charging » and equipped with PVI’s WATT system has been trialled between terminals 1 and 2 at Nice Cote d’Azur airport. The route fitted with the WATT system will transport its first passengers from January 2015 through until June, the end date for the trial when it will be analysed before deliveries begin from 2016.

Using the Watt System (Wireless Alternative Trolley Technology), it takes just 10 seconds for a full recharge, giving the bus enough autonomy to travel up to 600-800 metres between two stops. Supported by Transdev, developed and patented by PVI and subsidised by ADEME (the French Environment and Energy Management Agency), this ultra-fast charging system offers an environmentally-friendly and low emission solution. During the experiment period alone, it will prevent the emission of over 43 tonnes of CO2 and enable the complete elimination of fine particles.

For Dominique Thillaud, Chairman of the Board of Aéroports de la Cote d’Azur, « incorporating the WATT System technology at Nice Cote d’Azur airport is a strong move in favour of innovation, one of our company’s key concerns, and is naturally in line with our environmental policy, promoting future investments that are both economically wise, responsible and in favour of society. » Aéroports de la Cote d’Azur is proud to test this world first between French partners, which underscores the excellence of our transport sector industry« .

From 1st January 2015, Nice Cote d’Azur airport will be fully-powered with 100 % renewable electricity from French hydraulic production.  After 18 months of discussions and work with most European energy experts and suppliers, Electricité de France was chosen by the airport for its commitment and innovation capability which allows it to achieve this result. This was a choice that was all the more important because with an annual volume of 45 GWh, Nice Cote d’Azur airport is one of the biggest consumers in the Alpes Maritimes. This environmental choice by the airport means that over 160 administrative bodies, airlines and organisations present on the airport will switch to fully green, fully renewable electricity on 1st January 2015, along with Nice Cote d’Azur airport itself.

To date, Nice Cote d’Azur airport is the only French airport to make this energy choice. It has already installed an electricity and air-conditioning supply that reduces and for some aircraft even removes the need for auxiliary power units that produce very high greenhouse gas emissions and generate noise pollution for residents.  The purchase of hydraulic electricity should make it possible to lower current Aéroports de la Cote d’Azur emissions by a further 60%.

Dominique Thillaud says: « This energy choice was made in acceptable economic conditions, or in any case preferable to the principle of carbon compensation financial mechanisms, which proves that we can entirely reconcile economic growth objectives and environmental imperatives, and the reduction of greenhouse gases in particular. »

This is a new phase for Aéroports de la Cote d’Azur in the process which began with the Airport Carbon Accreditation to achieve carbon neutrality by 2018. 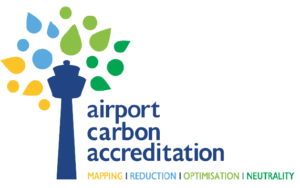 In 2011, the airport group joined the independent « Airport Carbon Accreditation » programme allowing the 111 signatory airports around the world to measure their carbon footprint and

With a reduction of almost 30% in per-passenger emissions in 4 years, on 16 December, Aéroports de la Cote d’Azur signed the transition to level 3 Carbon Accreditation for the Nice platform, reaching optimisation, i.e. the last decisive step in the process started to achieve carbon neutrality by 2018. Cannes Mandelieu Airport is now entering the programme.