Francophonia and Team Côte d’Azur celebrate the economic Francophonie with the support from the City of Nice.

Francophonia, a major agency promoting the Côte d’Azur among French-speaking countries, and Team Côte d’Azur, in charge of supporting business activities in the French riviera territory, launched together the first edition of the “FrancophoNice” Forum this year. The event took place at the “Centre Universitaire Méditerranéen” (CUM) from the 14th-15th of June 2019. International experts on the French-speaking world came together to share their insights on what should be the ideal exchange platform uniting economic Francophone stakeholders. Through their work, the stakeholders seek to combine economic imperatives with sustainable, green, social and cohesive development goals while respecting identities, which are the wealth of the French speaking community (“Francophonie”).

« FrancophoNice » : The French language supporting economic development
By organizing this event at the CUM, meeting point of all cultures, Francophonia and Team Côte d’Azur seeked to turn the Francophone economy into a reality rather than a concept by promoting the French language as a sustainable and steady growth lever. The City of Nice also supported this initiative to contribute to the building of a true economic catalyst within the French-speaking world. Other partners of the Forum involved the Chamber of Commerce and Industry of Nice Côte d’Azur, Air France, “La Tribune Côte d’Azur”, TV5 Monde, the “Fondation INRC”, Malongo, Galimard, the CESER, the MOF (“Meilleurs Ouvriers de France”) and the “Groupe Crédit Coopératif”. Over twenty international Francophone experts gathered to debate the idea of a sixth sustainable continent where French would be the reference language in the long term. This exchange platform will reinforce the economy of French speaking community on an international stage.

The discussions highlighted the challenges linked to the creation of a united Francophone economy. The importance of generation of wealth and benefits is key in sectors such as Tourism, Medicine, and Finance. The necessity to support Education and Training in French abroad means building a career and finding opportunities. The creation of a Francophone community with values, working towards a social and solidarity economy, sustainable development and CSR policies will encourage and involve future generations.

Given the success of the first edition, the « FrancophoNice » Forum will be renewed in 2020
The 2019 edition of the « FrancophoNice » Forum gathered more than 180 participants and was a real success. The quality and main outcomes of the debates enabled working groups to develop a set of concrete actions that will work towards a tangible Francophone economy and be implemented as of this year. The selected ideas involve:

The 2020 “FrancophoNice” Forum will therefore be the opportunity to draw first conclusions on the implemented actions, measure their impact and efficiency, and think of new economic Francophonie-oriented projects. 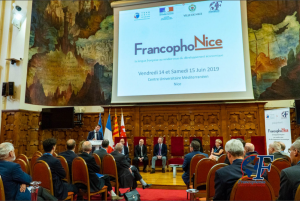 To (re)discover the event, we invite you to watch the opening ceremony video.

Based in Nice, Francophonia is a company involved in the promotion and the teaching of French abroad. Francophonia partners with more than a hundred academic institutions and associations of French as a Foreign Language teachers across the world. Its main activity consists in coordinating Francophonia Universities, which gather 800 teachers of over 80 nationalities in Nice each summer. The teachers play the role of French language Ambassadors abroad, especially via a strong presence on social networks. Francophonia also supports entrepreneurship projects with a highly social and solidarity dimension.