Diplomatic visit of the United States, first investor in the Côte d’Azur

Visiting under a banner of culture and economy

The U.S diplomats wished to enjoy their visit to the area, experience the Cannes Film Festival, and discuss the state of the fruitful economic relations between the Riviera and the U.S. in the area of new technologies: IT, biotech, and clean tech. 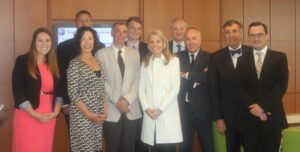 Christophe Perez, head of IT and the North American recruiter for Team Cote d’Azur presented what benefits the Riviera has to offer and why it is a desirable place for American Companies, the projects of the Nice Eco-Valley and Sophie Antipolis, and business relations which continue today through strategic parthernships in several areas and clusters. Afterwards, there followed a discussion on the progress and implementation of projects and funding innovation.

The United States: First foreign direct investor of jobs on the Riviera

The U.S accounts for 265 of the 1,775 foreign capital establishments here on the Riviera, second to the United Kingdom. The ECE lead in terms of staff numbers, until the U.S arrived (6,123 people). They alone account for 20% of ECE jobs, concentrated in the field of ICT jobs (25 ECE jobs for 2,641 employees), life sciences (13 ECE jobs and 403 employees), clothing, hotel and catering (ITC figures, December 2014).

[>]See the principal American organizations in our directory and read the testimonies of their leadership.

Strong Relationship between the Riviera and the United States

Several collaborations connect the Riviera to American regions and clusters. Strategic alliances have been establishes, on the one had, to accompany azureen start-ups who are desirous to compete on the American market, and on the other hand, to highlight the Riviera as a prime asset to American companies in search of a dynamic location that covers the European, Middle Eastern, and African markets.

Three Initiatives by Riviera Actors that Responded to the First Objective:

The creation of “soft bridges” allows for access to technologies, talents, research programs and academic groups from sides of the Atlantic and aims to move the concept of “twin cities” to “regional partners,” playing the roles of simplifier and accelerator.

The state of Utah and the city of San Diego are the leaders of this new strategic alliance. The partnerships with cities like Raleigh, N.C and Washington D.C are a preparations to reinforce foreign investment attraction to the Riviera.