Team Côte d’Azur Facilitates Relationships Between the Business Accelerator DigiHub in Quebec and the Business Incubators in Cannes and Sophia Antipolis.

A historical collaboration between the business accelerator DigiHub of Shawinigan, the third biggest Digital cluster in Quebec, and the French business incubator CréÀCannes was announced on May 27th, 2019.

During the collaboration announcement, participants discovered how this new partnership will contribute to the attractiveness of companies setting up in the DigiHub of Shawinigan
and in Créa Cannes. Team Côte d’Azur played a key part in structuring this international agreement by leading a two-pronged strategy: prospecting and capturing investments and talents. 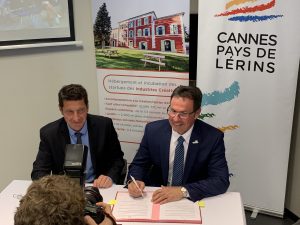 The agency promoting business activities in the Azurean region played a major driving role by facilitating relationships and discussions between involved stakeholders. Relationships with the DigiHub kept on strengthening after meetings with its Representatives in Montreal in 2017. Regular business meetings took place especially during the Innovative City Congress in Nice, enabling Team Côte d’Azur to identify DigiHub as a key partner for the Côte d’Azur.

The agreement focuses on the “Digital Francophonie” and involves the globalization of startups from both regions.
These startups can reciprocally benefit from accommodation and funding facilities in Quebec and Cannes, as well as from project engineering support, especially  in the e-Health sector.

Created in 2014, the DigiHub provides entrepreneurs with training, working and business platforms. There, they can access any resources they need to develop and achieve
their Digital-related projects. The DigiHub focuses on four core business activities: Digital entertainment, e-Health, Digital Museology and the 4.0 Smart Factory.

The incubator CréÀCannes was also launched in 2014. It represents a strong economic generator by helping startups for the first two years after their creation. It hosts startups as well as startups business support organizations. These companies are mainly specializing in Audiovisual, Digital and Creative Economy, Aerospace Technology Applications and Smart Agriculture.

The CASA Business Center and the DigiHub also signed a partnership on May 29th, 2019. This decision was motivated by the relevant example of the startup Cintoo 3D from Sophia Antipolis, which set up its Canadian business activities in the DigiHub from 2016. The objective of this new collaboration is to help other startups expand their businesses in Quebec and in the Côte d’Azur. 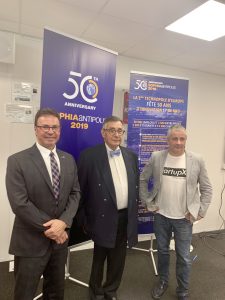 The agreement between the third biggest digital cluster in Quebec and the first technopole of Europe has two main objectives: developing opportunities for companies hosted by both cities, and facilitating contact with relevant partners, investors and decision-makers on local compliance and regulations. Mostly companies specializing in the Blockchain technology and in Artificial Intelligence, a key branch of the Côte d’Azur since the recent 3IA labelling of the region, are involved.

A cryptopass pilot project has also been initiated by a group of companies from the DigiHub of Shawinigan and the CASA Business Center. This project aims at developing a smart contract to facilitate the arrival and settlement of immigrant workers by redirecting them towards the right places and institutions.

Overall, these new historical collaborations are a great success and will hopefully encourage a significant number of companies from Quebec to set up in the Azurean region.